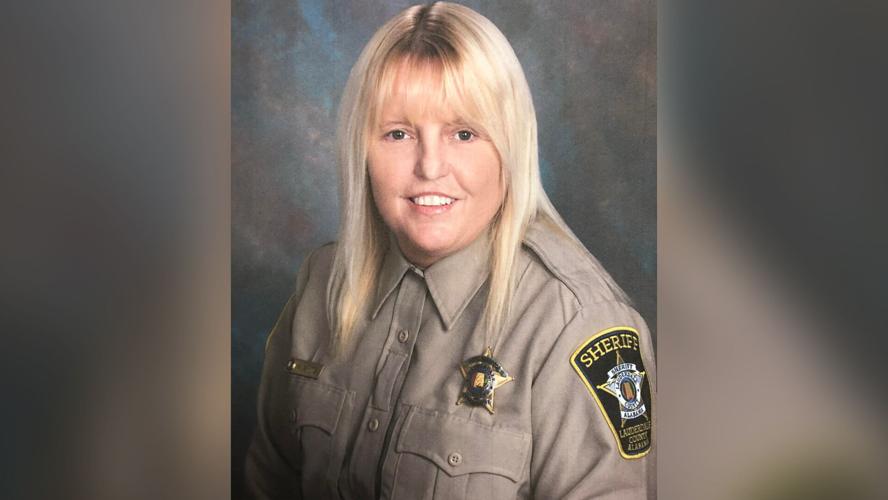 Assistant Director of Corrections for Lauderdale police Vicki White said she was transporting Casey White from the detention center to the court before escaping. 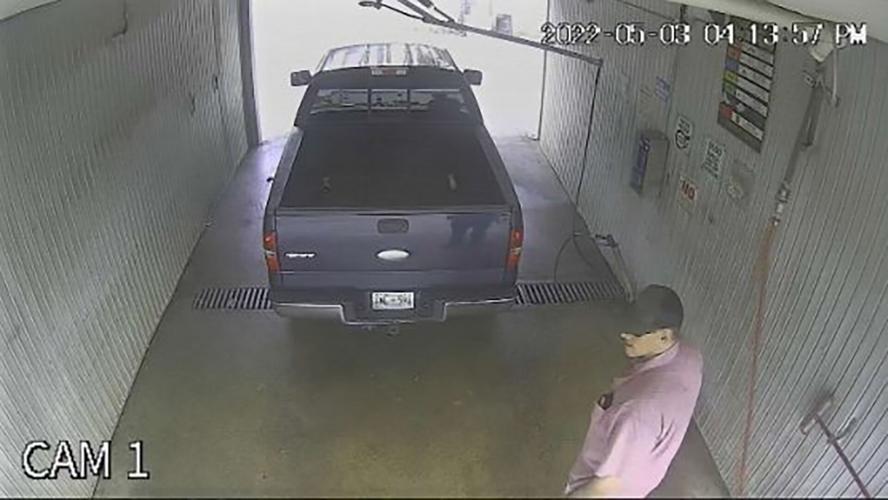 A tip among hundreds led police to capture Vicky White and Casey White. But Vicky White's death leaves many questions. U.S. Marshals released photos of who they believed was fugitive Casey White caught on surveillance at an Indiana car wash.

Assistant Director of Corrections for Lauderdale police Vicki White said she was transporting Casey White from the detention center to the court before escaping.

A tip among hundreds led police to capture Vicky White and Casey White. But Vicky White's death leaves many questions. U.S. Marshals released photos of who they believed was fugitive Casey White caught on surveillance at an Indiana car wash.

Recaptured Alabama fugitive Casey White intended to have a shootout with law enforcement, and would have done so had pursuing officers not forced him to wreck in a ditch Monday in Evansville, Indiana, a sheriff said Tuesday.

The crash ended White's 11-day run on the lam with former corrections officer Vicky White, the woman accused of springing him from an Alabama county jail April 29 -- and who authorities preliminarily believe fatally shot herself after the wreck.

Officers who'd been tipped the pair were in Evansville gave chase after seeing them leave a motel in a Cadillac Monday, and had the pursuers not forced them into a ditch, "the fugitive was going to engage in a shootout with law enforcement," Vanderburgh County Sheriff Dave Wedding told reporters Tuesday, citing White's interviews with investigators after his capture.

"That action may have saved many of my deputies' (and other officers') lives," Wedding said.

"(Casey White) said he was probably going to have a shootout, at the stake of both of them losing their lives," Wedding said.

Plenty of questions remain about the actions of the pair, who authorities said may have fostered a clandestine, romantic relationship when the man normally housed in state prison intermittently stayed at a county jail while awaiting trial in a pending murder case. Their travels -- which authorities say involved at least four vehicles from Alabama to Indiana -- sparked a multistate manhunt.

But they appeared equipped for more hiding: In the Cadillac, police found about $29,000 in cash, wigs, four handguns and an AR-15 rifle, Wedding said Tuesday. Police previously said Vicky White probably was using cash from a recent home sale.

The pair ended up being in Evansville for a week, but had paid for a 14-day stay at the motel, Wedding said.

"They thought ... they'd driven long enough that they wanted to stop for a while, get their bearings straight, and then figure out their next place for travel," Wedding said.

"I want to go back to Alabama," Casey White, wearing a yellow jumpsuit and orange slides, said while appearing virtually before a judge from jail.

When he returns to Alabama, he will immediately go before a judge for an arraignment, and then be transferred to state Department of Corrections custody instead of county custody, said Rick Singleton, sheriff of Alabama's Lauderdale County and Vicky White's former boss.

Live updates: The latest on the Alabama fugitive case

Casey White has been speaking freely with investigators after his capture, Wedding said Tuesday.

"He was pretty candid with the investigators last night. They had a fairly lengthy interview," Wedding said.

What led to the chase

Vicky White, 56, and Casey White, 38, are believed to have been in Evansville since at least May 2, when a city police officer proactively checked the license plate of a 2006 Ford F-150 truck, Evansville Police Chief Billy Bolin said Tuesday.

Authorities now believe the pair had bought the truck on the lam in Tennessee -- but the May 2 check did not indicate any connection between the truck and the fugitive pair, Bolin said.

US marshals looking for the pair said they learned Sunday that the truck was abandoned at an Evansville car wash -- an abandonment that Bolin said was initially reported to city police May 4.

On Monday, US marshals announced that May 3 surveillance images from the car wash showed Casey White there with the truck. Investigators learned that the pair left the car wash in a Cadillac, Wedding said, adding he didn't know how they obtained that vehicle.

Also Monday, an Evansville police officer noticed the Cadillac in the motel's parking lot and "notified us immediately," Wedding said.

Law enforcement officers then watched the motel. Officers saw Vicky White exit the motel Monday wearing a wig, US Marshal Marty Keely said. Then, she and Casey White got into the Cadillac and drove away.

Authorities gave chase. The pair "fled out of the hotel parking lot, northbound on US Highway 41 (and) turned in at an industry known as Anchor here in Evansville," Wedding said.

"They went through the parking lot (and) went through a grass field. The members of the US task force basically rammed the vehicle and pushed it into a ditch," Wedding said at Tuesday's news conference.

The car wrecked and rolled over, Keely said. Casey White was driving the car, according to the US Marshals.

Casey White reportedly told authorities to help "his wife" who had shot herself in the head and told them he didn't do it, according to Keely. Casey White and Vicky White were not married to investigators' knowledge, Keely said, and authorities have previously said they were not related.

Authorities preliminarily believe that Vicky White shot herself "once the vehicle crashed," Wedding said. She died at a hospital later Monday.

A coroner will confirm whether Vicky White shot herself, Wedding said.

Vicky White indicated 'she had her finger on the trigger,' dispatcher is heard saying

During the chase, Vicky White indicated during a call with police dispatchers that she had a gun, Wedding told CNN, hours before Tuesday's news conference.

In dispatch audio from Evansville police, a dispatcher noted during Monday's chase that "we could hear her on the line saying she had her finger on the trigger." The dispatcher earlier can be heard saying "they're calling into 911."

It's not clear who made the 911 call. Authorities have not released the audio that they believe contains Vicky White's voice.

No law enforcement officers fired any shots during the chase, according to Singleton.

The pair initially disappeared April 29 when Vicky White, who was to retire that day as Lauderdale County's assistant director of corrections, said she was taking Casey White from the county jail to a courthouse for a mental evaluation.

But they never arrived at the courthouse, and authorities later discovered she drove him in a patrol car to a shopping center parking lot. They abandoned that car and left in a vehicle Vicky White staged there the night before, officials said.

Casey White will be brought back to Alabama, where he was facing murder charges before his escape and already serving a 75-year sentence for other crimes. Before her death, Vicky White was charged with permitting or facilitating escape in the first degree, in addition to forgery and identity theft charges connected to her use of an alias to purchase the 2007 Ford Edge in which the pair left Alabama, officials said.

The veteran officer has been described by Singleton as "an exemplary employee" with an "unblemished record" who had the trust and respect of her colleagues. As the investigation unfolded, the sheriff acknowledged her apparent behavior is inconsistent with the person her colleagues thought they knew.

"Obviously there was a side to Vicky White that we weren't aware of," he told CNN previously.

Though authorities have said the pair may have had a romantic relationship, in part from what other inmates have said after the pair's escape, Singleton said Monday there was still more to learn about why Vicky White was involved

"What in the world provoked her, prompted her to pull a stunt like this, I don't know. I don't know if we'll ever know," Singleton said.

Search was challenging for investigators

Vicky White "was basically the mastermind behind the whole plan," Singleton said Tuesday.

"He was behind bars. He really couldn't plan too much behind bars, but, yes, I think -- personally, I think she was the one to put the plan together," he told CNN's John Berman on Tuesday.

As the second in command at the county detention center, White used her position to execute the plan, Singleton said.

"She scheduled the van transport that morning, made sure all the other armed deputies were out of the building and tied up in court. Knew the booking officer wouldn't question her ... when she told her she was going to take him to court and drop him off with other employees," Singleton said.

"She arranged -- purchased the getaway car, she sold her house, got her hands on cash, she went shopping, bought clothes for him. She just -- she just obviously put the plan together," Singleton said.

"Casey White didn't escape from the facility; he was basically just let out," the sheriff said.

"This escape was obviously well planned and calculated," Singleton said Monday, noting that escapes from county jails are usually spontaneous. "A lot of preparation went into this. They had plenty of resources, had cash, had vehicles, had everything they needed to pull this off, and that's what made this last week and a half so challenging. We were starting from ground zero, and not only that ... they got a six-hour head start on us."

Investigators previously released video of Vicky White at a Quality Inn in Florence, Alabama, where they say she stayed the night before the escape. Singleton also said they have footage of her shopping for men's clothing at a department store and at an "adult store," adding that she "obviously had a change of clothes" for the inmate.

Before her disappearance, Vicky White submitted her retirement papers, sold her home for well below market value and purchased the car the pair would use to escape, officials have said.

The day of the disappearance was set to be her last day of work, but her retirement papers were never finalized, according to Singleton. The Lauderdale County Sheriff's Office announced last week that she was no longer employed there.

Counselors will be made available at the Lauderdale County Detention Center for staff who may need them after Vicky White's death, according to Singleton.

"It's a small agency, like family," he told CNN. "Some of these younger deputies she was like a mother figure to them and I know they're going to take it hard."

Correction: An earlier version of this story incorrectly described the location of Vanderburgh County; it is in Indiana. The story also had the wrong first name for US Marshal Marty Keely.

'Not your everyday arrest:' Police relocate alligator after it turns up outside South Carolina school