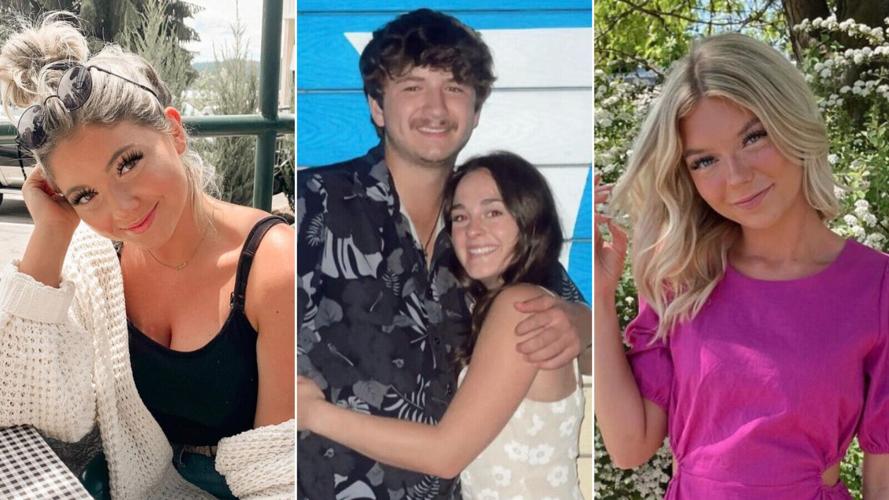 Kaylee Goncalves, Ethan Chapin, Xana Kernodle and Madison Mogen were killed this month off campus at the University of Idaho. 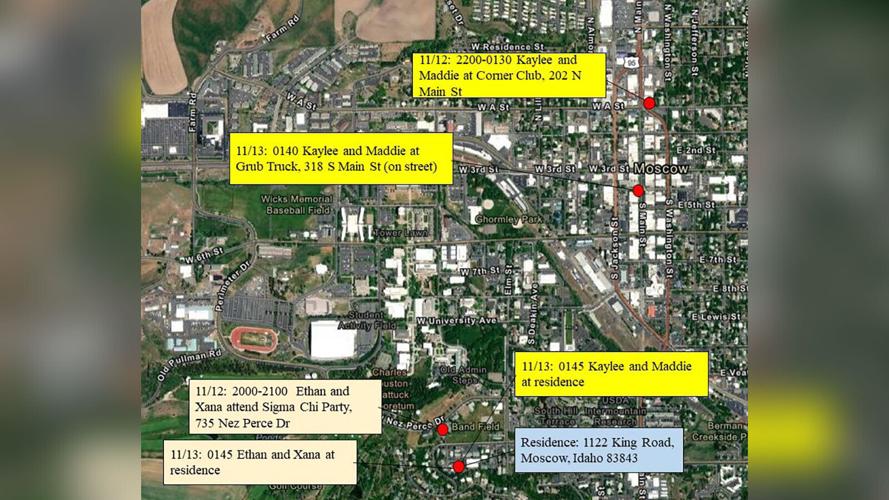 Investigators have released a map depicting the movements of four University of Idaho students the night they were murdered.

Kaylee Goncalves, Ethan Chapin, Xana Kernodle and Madison Mogen were killed this month off campus at the University of Idaho.

Investigators have released a map depicting the movements of four University of Idaho students the night they were murdered.

Investigators in the fatal stabbings of four University of Idaho students have gone through more than 1,000 tips that have arrived in the 10 days since the bodies were found, authorities told reporters at a Wednesday afternoon news conference.

Idaho State Patrol Col. Kedrick Wills also said more than 150 people have been interviewed, but authorities gave no indication they were closer to naming a suspect.

Law enforcement officials remain tight-lipped, answering several questions about the case by saying only that the information was part of the investigation, which began after the bodies of Ethan Chapin, 20, Kaylee Goncalves, 21, Xana Kernodle, 20, and Madison Mogen, 21, were found November 13.

Moscow Police Chief James Fry said every tip will be pursued and they believe there is still more information to be gathered. He called on the public to use a tipline or an online portal that accepts video or photographic evidence.

"No bit of information is too small," he said. "So far, (information submitted) has helped investigators build a picture of the areas of interest and relationships these four had with each other and our community."

Authorities have not ruled out that more than one person may have been involved in the killings, they have said. Police believe the attack was targeted and that the killer or killers used a fixed-blade knife.

More than 45 investigators from the FBI, state police and Moscow police are involved in the murder case, the first in Moscow since 2015.

Steve Goncalves, Kaylee's dad, is "a bit in denial" after the killings, he told CNN on Wednesday, and is focused on securing justice for his daughter, despite the dearth of information.

"We all want to play a part in helping, and we can't play a part if we don't have any real substantial information to work from," he said, joined by his other children, Alivea and Steven.

Alivea expressed frustration with the timeline -- saying she knows her sister got home about 11 minutes later than police say she did -- as well as with rumors that have circulated amid the vacuum of information. She dismissed claims her sister was being stalked, echoing a statement Tuesday by police that they "have not been able to verify or identify a stalker."

"She was extremely conscious," the sister said. "She was very vigilant. I think that she really would have noticed something."

Alivea Goncalves further described her sister as a goofball who "didn't dwell on any of the negatives." She enjoyed laughing and playing pranks on loved ones, she said.

"She would block me on Instagram if I borrowed shirts without asking -- that was not uncommon," Alivea said, chuckling.

Kaylee was also a hard worker, her brother said, and she would want him to fight for her.

"Just sitting in my bed and crying myself to sleep isn't going do her any justice, and that's not what she would want me to do," Steven Goncalves said.

Kaylee Goncalves was popular and knew everyone, her dad said, and she often threw parties, like many young people her age.

Asked what he's heard from local police, Steve Goncalves said, "They're not sharing much with me," and suggested Moscow police might be limited in what they can share.

The killings in the rental home where the four lived with two other people rocked the campus of 9,300 students, with one fellow student telling CNN she won't come back until a suspect is in custody.

Fry has not ruled out the possibility there's still a threat to the community, he said last week, urging residents and students to stay vigilant, report all suspicious activity and be aware of their surroundings.

Some professors canceled classes last week, including Zachary Turpin, who wrote on social media he "can't in good conscience hold class" until police release more information or identify a suspect.

University President Scott Green sent a note to students and employees Tuesday about learning options. Students are on fall break. When classes resume, there will be two weeks left in the semester.

"Faculty have been asked to prepare in-person teaching and remote learning options so that each student can choose their method of engagement," he wrote. "Moving courses fully online is not preferred but may be necessary in limited situations."

More state troopers will be on campus for the foreseeable future, Green said. The size of the school's security force also has been increased, he said.

The city of 26,000 residents sits on the border with Washington, about 80 miles south of both Coeur d'Alene, Idaho, and Spokane, Washington. It is 9 miles from Pullman, Washington, home to Washington State University.

What authorities know about the attack

Investigators have begun building a timeline regarding the students and their last known whereabouts.

Chapin and Kernodle attended a fraternity party from 8 p.m. to 9 p.m. on November 12, the night before they were found dead.

Goncalves and Mogen were at a sports bar between 10 p.m. and 1:30 a.m. They were then seen ordering from a nearby food truck, according to the truck's Twitch stream.

As they waited about 10 minutes for their food, they chatted with other people standing by the truck. They did not seem to be in distress or in danger, the man who manages the truck told CNN.

Goncalves and Mogen used a "private party" for a ride, arriving home at 1:45 a.m., police said. Investigators do not believe the driver was involved in the deaths, they said. By that time, all four victims were back at the house, police said.

How and when the attack transpired is a major focus of the police probe.

It was not until just before noon that Sunday when a 911 call was received about an "unconscious individual" and responding officers found the four students dead. There were no signs of forced entry, police said.

Two other roommates were at the home and uninjured, and police do not believe they were involved in the crime, authorities said.

The slain students were "likely asleep" before the attack, police said, citing the Latah County coroner. Some of the four -- it's not clear how many -- had defensive wounds, and there were no signs of sexual assault, police said.

Police have not identified the 911 callers, saying only the call came from one of the surviving roommate's phones. The people who spoke on the call are not suspects, police Capt. Roger Lanier said Wednesday.

On Monday, police said a dog was found at the home.

"The dog was unharmed and turned over to Animal Services and then released to a responsible party," Moscow Police said on Facebook.

The University of Idaho announced it will host a candlelight vigil November 30.

"Please join us from where you are, individually or as a group, to help us light up Idaho. Light a candle, turn on stadium lights, or hold a moment of silence with us as we unite on campus," the university said.

Man who killed 6 in Christmas parade gets life, no release

One injured after late night shooting in Cedar Rapids

Roommate charged with murder after Ames man dies in stabbing