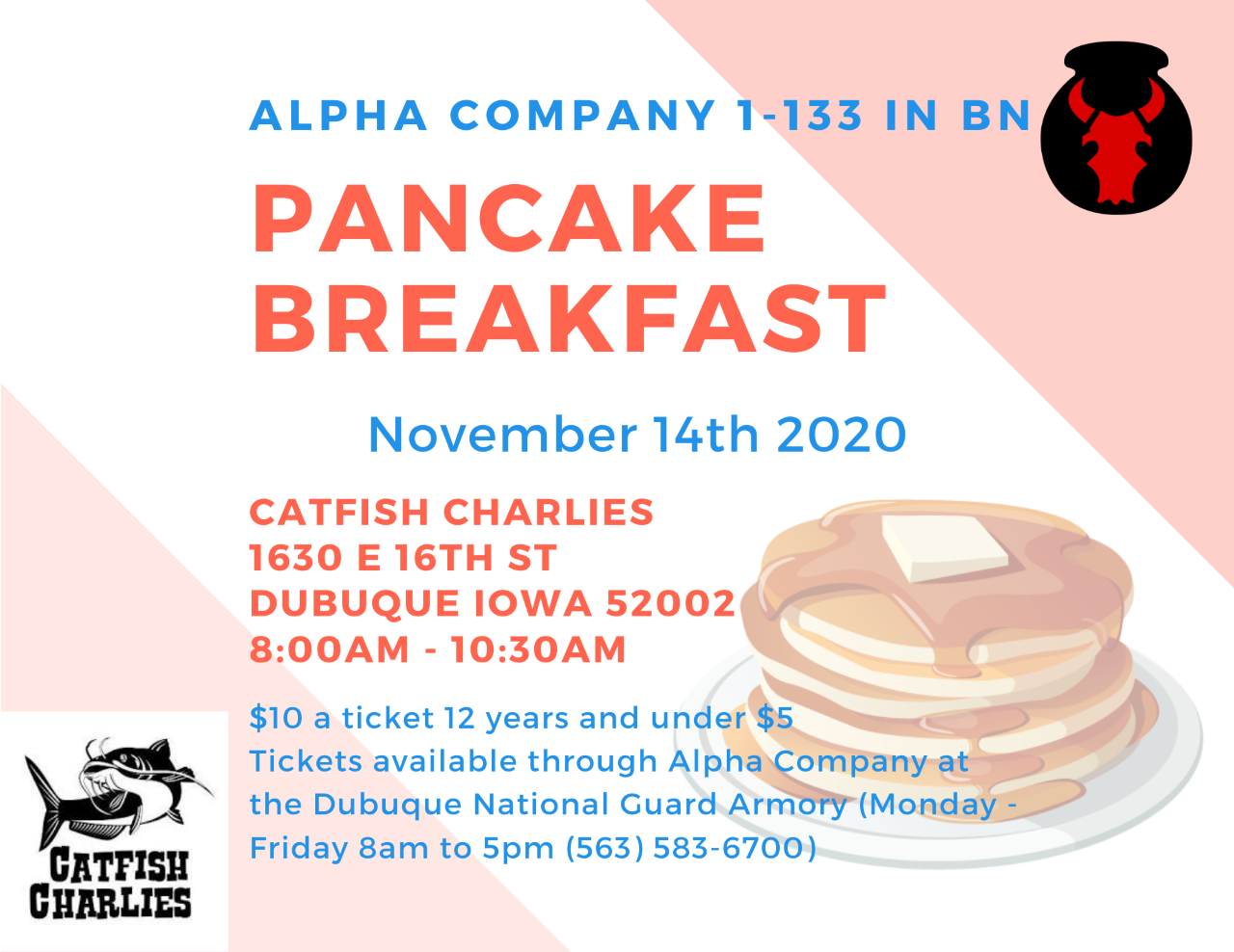 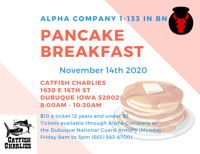 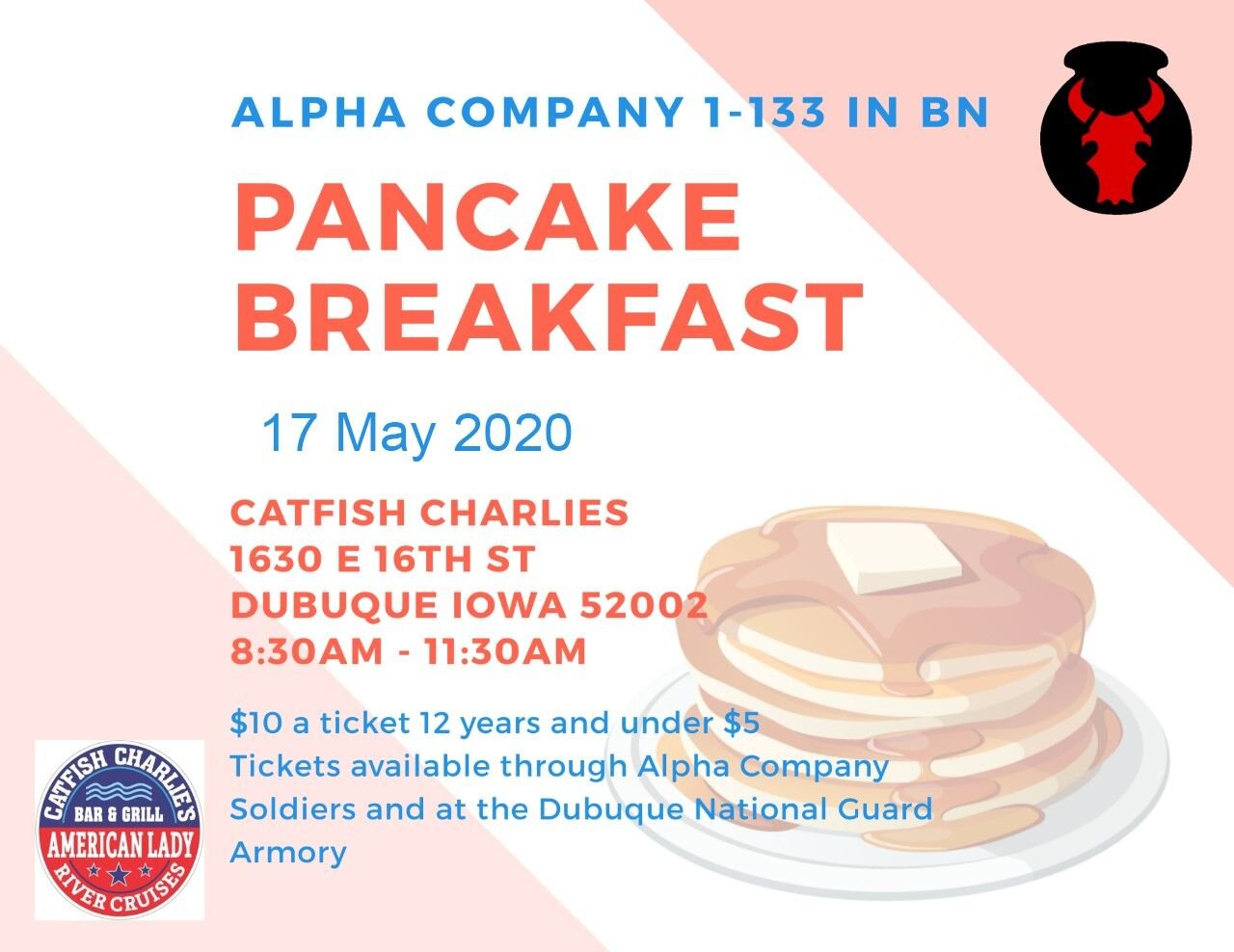 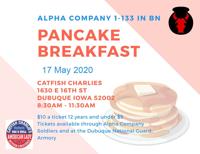 Postponed twice due to COVID-19, a pancake breakfast to benefit the 1-133 Family Readiness Group of Dubuque's Alpha Company has been re-scheduled for Saturday, November 14, 8:00-10:30 a.m.

It will be held at Catfish Charlies, 1630 East 16th Street, in the Dubuque Yacht Basin.

The benefit will help local families of the 'Ironman Battalion."

Soldiers of the famous 1-133rd have been called upon to serve our nation once again and are currently on deployment in the Middle East deployment, for likely a year.

Deployments can be tough on families, and the Family Readiness Group will be there to provide support for the soldiers' families throughout the new deployment.

The 'all-you-can eat' pancake breakfast will be held on the morning of Saturday, November 14, 8:00-11:30, at Catfish Charlie's in Dubuque.

Tickets are available at the Dubuque National Guard Armory and through any Alpha Company Soldier or family member.

The U.S. Army recently announced its latest mobilization orders, which will send the 1st Battalion, 133rd Infantry Regiment back to the Middle East, for what is expected to be a one-year security mission in several nations, which will likely include Iraq, Afghanistan, Kuwait, Qatar, Saudi Arabia and the United Arab Emirates.

Some 550 soldiers make up the 1-133. Headquartered in Waterloo, the battalion also has armories in Dubuque, Iowa Falls, Charles City and Oelwein.

The November 14 pancake breakfast will benefit families of the Dubuque Alpha Company as they prepare for the May deployment.

The reputation of the 'Ironman Battalion' is legendary. The 'Ironman' nickname goes back decades, to World War II, when the battalion spent a record 611 consecutive days involved in combat.

On the larger scale, the 1-133 is part of the 2nd Brigade Combat Team, 34th Red Bull Infantry Division. Today, spread mainly across 9-states, including Iowa and Minnesota.

In recent years, the 1-133 has been deployed 5 other times to Afghanistan, Iraq, Kosovo, Kuwait and Egypt. Those deployments were combinations of combat and peace keeping missions in the Middle East. The most recent was in 2009, and that deployment sent the Iowa soldiers to Afghanistan.

When the 1-133 was activated and deployed in 2005, they first trained at Camp Shelby, Mississippi, and then headed to Iraq. In Iraq, the Iowans served as convoy security soldiers, beginning in May of 2006. They would end up providing escorts to some 62,000 trucks over 4 million miles of Iraqi soil, especially in the Al Anbar province.

That mission was supposed to end in the spring of 2007, but was extended, and the 1-133 soldiers didn't return home until late July, 2007. It was also a costly mission for the 1-133. Two soldiers from Company C, Sgt. Kampha Sourivong of Iowa City and Sgt. 1st Class Scott Nicely of Marshalltown, both died in combat on September 30, 2006 in Iraq.